A brief description of the process of manufacturing laminated glass.

Glass suppliers will supply laminated glass in stock Jumbo sizes in various standard configurations of thicknesses and coatings but very often these do not suit the requirements of our project and the glasses must be made up as cut to size laminated sheets.

Architectural laminated glass is most commonly made using sheets of glass with a plastic interlayer.  For the purposes of this article we will focus on PVB (polyvinyl butyral) as the interlayer material.

PVB comes in standard thickness with 0.38mm being the nominal standard single ply with the differing thicknesses being multiples of this and built up in the assembly process to accommodate deviations from flatness which may occur due to heat treatment processes to toughen or strengthen the leaves of the laminate.  A thickness of 1.52mm is commonly used for this purpose.

The normal process of assembling the laminated glass panes is as follows:

In a temperature (18 – 25˚C) and humidity (<25%) clean room environment the PVB interlayer is laid over one sheet of glass.

The second sheet of glass is laid over the PVB covered first sheet.  In some processors accuracy of alignment is controlled by CNC machine otherwise the sheets are manually adjusted for alignment and the excess PVB trimmed off.

The assembled sheets are then passed between heated rollers often in a large oven to create an initial bond and to expel air pockets.  2 passes are generally used with the first temperature range being at 135 to 140˚C and the second at 180 to 200˚C. This process is known as de airing but does not eliminate all the air between the surfaces.  At this stage the assembly is still opaque.

The de aired sheets are loaded onto a frame with spacers separating them to allow good airflow and even heating in the autoclave. At this point it is possible to introduce visual “defects” into the glass which in general are not covered by the relevant standard – BS EN 125343-6.  We will look at these later.

An alternative to the vertical stack system above is to use a vacuum bag, a large sealed bag which holds the glass at a +1-bar pressure relative to the pressure in the autoclave.  Generally, these are used for “specials” such as large fins or glasses with cut outs etc.  Because the vacuum bags are loaded into the autoclave on shelves horizontally far fewer panes can be processed at the same time.  This means that for large scale production of glass this carries a significant cost premium which specifiers should be aware of.

The autoclave is a large chamber which subjects the assembled sheets to heat and pressure.  During this process the autoclave is heated to 140˚C to 160˚C at a predetermined rate depending on the thickness of the glasses themselves and the number of panes in the chamber. When the required temperature is reached the pressure, typically 13 to 14 bar, heat is applied, again at a predetermined rate.  The residual air between the surfaces is compressed by the pressure of the autoclave and forced into solution in the softened PVB.  The temperature is slowly reduced while the pressure is maintained trapping the air in the PVB as it hardens.  The pressure is released at or below 50˚C and the now clear laminated sheets are removed from the autoclave and the edges trimmed to remove any excess PVB.

The above is an extremely simplified version of the process and the variables involved in every stage are complex and critical to the outcome.

The processing of the assembly involves so many variables all of which lead to problems that can be difficult to pin down which one might be responsible for any given defect.  Some processors maintain that high performance low E coating on glass can affect the ability of the laminate assembly to absorb the heat uniformly in the pinch roller stage, others will say this would be negligible if it had any effect at all.  Like the heat treatment process this would tend to indicate that there is as much craft as science in the process of assembling laminated glass and the delicate balance of the variables requires not only good equipment but skill and experience.

In some processors it has lately become widespread practice to clamp the edges of an assembly during the autoclave process, sometimes this is done routinely for all glass, at other times it is done to glass which has evidence of separation at the edges when it comes out of the autoclave.  Bulldog clips as used in stationary are applied continuously along the edge of the glass maintaining pressure at the edge so that when the PVB softens in the heat of the autoclave the layers are clamped together.  When the pressure is applied the air is either forced out of the edges or into solution in the PVB.  When done badly this can cause compression of the PVB at the edges resulting in optical distortion in the glass due to the lensing effect of the differing thickness.   The same type of distortion though local and not consistent along the full length of the glass can be found when pressure points are created when the glass panes are stacked on an A frame trolley in the autoclave and small spacer blocks are placed between the panes of glass particularly in the edge deletion zone where the blocks would typically be less than 20mm deep and often no longer.  As the temperature increases and the PVB softens the glass weight or sometimes a safety strap pulled tight over the panes causes local compression at the pressure points and semi-circular lenses are formed.  From a consultant’s point of view this defect is particularly difficult to do anything about if it has not been specifically prohibited in the performance specification as it is difficult to clearly identify as a defect under BS EN 12534 part 6 and Hadamar and usually cannot be seen from the normal glass inspection distances and angles but is very clear from an oblique angel and from distances generally greater than the normal 3 metres.

The PVB should be stored in a controlled environment with humidity at less than 25% and the temperature range set between 18 & 25° Celsius.  Higher humidity levels can lead to condensed moisture becoming trapped in the layers when the air is absorbed into the PVB during the autoclave process.

Bad Planity (glass in not flat)

Perfectly flat annealed glass is less problematic although problems can occur when laminating annealed glasses which have significant bow either overall or at the edges.  These sheets must be assembled in such a way that any bow or curvature in the sheets is concentric to ensure the edges are naturally closed.  When this is not done the “solution” of using the bulldog clips as described above is often employed.  The most common causes of flatness issues occur in heat treated toughened or heat strengthened glass due to rollerwave introduced during the treatment process.  Failure rates of heat treated glass laminates can be significantly reduced if the glasses are nested properly.  For this to happen the rollerwave frequency and pitch must be identical on all the sheets in the assembly requiring strict control over the loading of the toughening furnace ensuring the glasses are indexed to a datum to ensure consistency of the wave location relative to the edge of the sheet.  This can be difficult to monitor when using asymmetric heat-treated glass assemblies due to the different wave depth produced in different thicknesses of glass (FT and HS glasses of the same thickness will have the same wave depth; the frequency is always the same).  Generally, in these situations the thickness of the PVB would be increased to compensate with 1.52mm being normal.

Projects in hot and humid environments such as the Middle East for example can often see surface temperatures on structurally silicone glazed panels reach more than 80˚C with high atmospheric humidity.  The elevated temperature for extended time can allow the air to come out of solution and form bubbles.

Less common with more modern PVBs but exposed edges or those assemblies where the edges are covered by a gasket only which can trap water are vulnerable and in these cases an ionoplast interlayer should be considered.

Silicone joints between glass edges in bolted glass assemblies and structurally bonded glass facades can sometimes be affected by edge delamination attributed to gas migration from the silicones, it is important that the PVB supplier is consulted on compatibility if these details are to be used.

This part of the standard specifies defects of finished sizes and test methods with regard to the appearance of laminated glass when looking through the glass and notes that “special attention is paid to acceptability criteria in the vision area”.

The standard gives examples and descriptions of defects – bubbles, scratches foreign body etc. etc and goes on to specify (Clause 4) how the glass should be inspected in the factory from 2m distance and in front of a matt grey screen.

A table is provided for the assessment of defects in the vision area.  The criteria given are, size of pane and the size of the defect.  Based on these and the frequency or distance from each other it can be determined whether the pane meets the requirements of the standard or not.

A specific and short clause (9) deals with the edge area for unframed edges.  It says “When inspected according to the test methods in Clause 4, shells and bubbles are permissible if they do not become obvious. Interlayer defects, i.e. extrusions and retractions, are permissible.

So, combine this with Hadamar or GGF inspection criteria and some may say the guidance is vague and very open to interpretation.  No mention is made anywhere of edge lens effect which may be caused by clamping in the autoclave nor is the practice prohibited in any standard that we are aware of.   Clamping is not used when vacuum bag processing is employed and therefore specifying this will avoid it, but the process takes so much longer due to preparation time and the capacity of the autoclave that the price is very much higher, and someone has to pay.

Once again, a very much simplified explanation of a process many of us are just about aware of that happens before the glass arrives on site, hopefully interesting and informative. 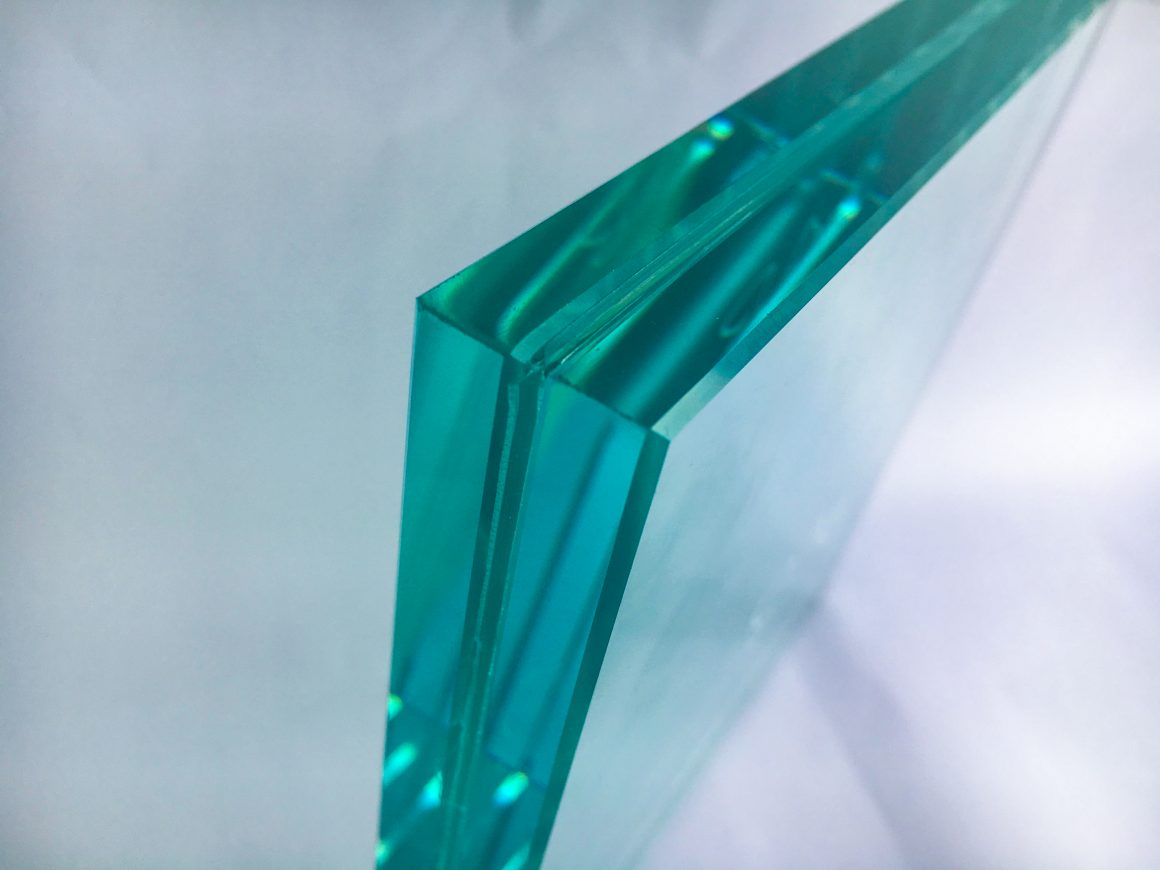